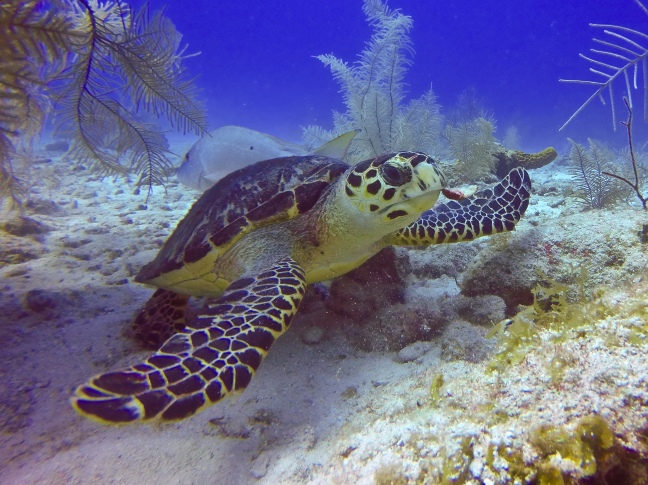 On my top 10 favorite animal list… Sea Turtles!  My featured photo is of a species called the Hawksbill Turtle.  I enjoyed my encounter with this favorite sea friend at Blue Peters Reef in Grand Cayman on June 16th… YUP! on World Sea Turtle Day!!  Serendipitous!

It let me approach closely I believe because it was very busy eating a shell.  See it in the turtle’s beak shaped mouth?  Odd, because they are omnivores that eat eel grass, sea sponges, sea anemones and squid.  Perhaps this was a female that needed some calcium in her diet to produce her own eggs???  Hypothesis.  Maybe one of you could do some research to figure this out for me.  Check out the VIDEO footage below of “her?” eating.

On a sadder note, like most sea turtles, Hawksbills are on the Endangered Species list; mostly due to being hunted for their beautiful shell… Tortoise Shell… that in some places is still used to make jewelry, hair accessories and decorative boxes.

Here is a video that Taylor took of another Hawksbill that we saw while at a dive site called Rays Bedroom. Taylor was coming back up after finishing our 60 minute dive and doing a decompression safety stop.  Taylor had to stop between 15 and 20 feet for three minutes so he could not move back down towards the turtle.  Luckily the Hawksbill was curious enough to come check Taylor out.  The cool thing though is that Taylor was able to get beautiful footage of the Hawskbill’s shell from above.

In the videos you can really see how much of the color Red is lost.  Please question or comment.  I’d love to hear from you!