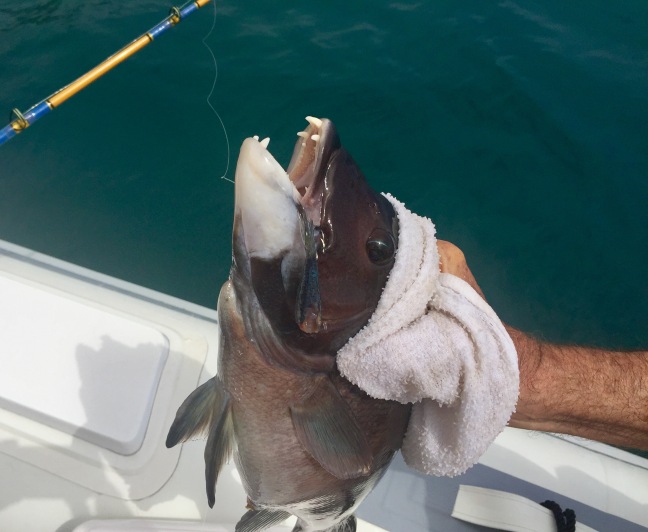 Earlier this month we were fishing on the more remote “backside” of Southern California’s Catalina Island.  We tied up the bow line of our little boat to a large kelp frond just outside Catalina Harbor to hold us in place around the off-shore “forest”.

The water was crystal clear so I could see the bright orange Garibaldi Fish (CA State Marine Fish) and Calico Bass frolicking below.  Nature’s aquarium! 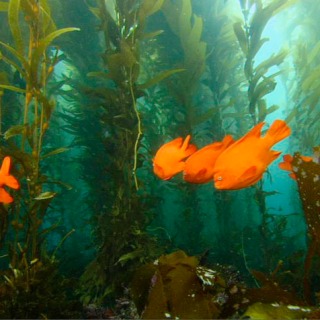 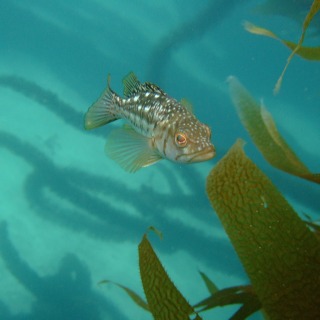 We dropped our fishing line loaded with squid between the kelp stalks hoping to bring a big speckled “Cali” home for dinner.  Instead, we were treated to catching several beautiful California sheephead (Semicossyphus pulcher).  A beautiful fish in the wrasse family, the sheephead has some pretty crazy teeth.  The front two incisors look very human like.  The tale of the teeth is obvious from these images of one of the fish we caught. Fingers beware! Carnivore or Herbivore?  You decide.

While reportedly very tasty, this omnivore decided to “catch and release” all the sheepheads we caught even though many were CA Fish and Wildlife “legal” at over 12″ in length.  The California sheephead is classified as a vulnerable species due to overfishing and the relatively long time that it takes them to reach reproductive maturity. Sheepheads are also considered (like the cuter and more celebrated sea otters) to be a critical keystone predator in the kelp forest.  Their specialized teeth allow them to feed on the sea urchins that can dangerously overpopulate and overgraze the kelp.
See Video on Kelp Forest Keystone Species
#NoSheepheadNoKelp  #SavetheKelp

I learned a final fascinating fishy fact after observing some very different color patterns in the sheephead fish we caught.  Several of the sheepheads were a beautiful pale pink color (females) but one big one was mostly black with a broad pink stripe (male).  There is a large color variation between the male and female California sheephead that is typical of many animal species (think Peacock!).  BUT those of you observing closely…. may be wondering about the one that I caught with the toothy grin in the picture above. It doesn’t quite look like either of these; does it? Odd? 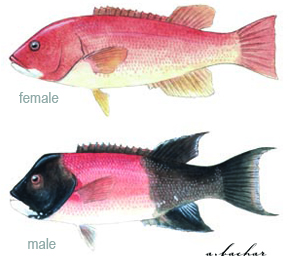 That’s because my fish is in the process of changing from a female to a male.  What?! Yup, it is changing its sex and has not completed the change fully yet!!  Cool fact…. California sheephead fish are all born female!   When the females reach 12-14″ in length hormones trigger the biggest among them to develop the coloration, square forehead and reproductive parts of a male.   Nature never ceases to amaze!  Get out there and explore.  Share your stories!